The Man Who Would Be King 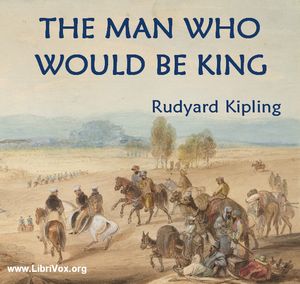 The Man Who Would Be King

LibriVox recording of The Man Who Would Be King, by Rudyard Kipling.
Read by Philippa.

The Man Who Would Be King tells the story of two British adventurers in British India who become kings of Kafiristan, a remote part of Afghanistan. It was inspired by the exploits of James Brooke, an Englishman who became the "white Raja" of Sarawak in Borneo, and by the travels of American adventurer Josiah Harlan, who claimed the title Prince of Ghor.

The story was first published in The Phantom Rickshaw and other Tales (Volume Five of the Indian Railway Library, published by A H Wheeler & Co of Allahabad in 1888). It also appeared in Wee Willie Winkie and Other Stories in 1895, and in numerous later editions of that collection.It is the basis for John Huston’s 1975 film of the same name, starring Sean Connery and Michael Caine as the "kings", and Christopher Plummer as Kipling. (Summary from Wikipedia adapted by Philippa)

Reviewer: WaterRabbit - favoritefavoritefavoritefavoritefavorite - April 21, 2012
Subject: Great Story and Great Reader
This is one of my favorite stories, I saw the film when I was a kid, have the book on my Kindle for PC and just finished this audio version. The audio was well recorded and the narrator did a great job, not just reading but acting out each part. She took a great story and made it better, Kipling would be proud, Thank You, Joseph W. aka WaterRabbit, Cape Cod, MA, USA
100% CapeCodMediaKing Approved

Reviewer: Sayeth - favoritefavoritefavoritefavoritefavorite - June 12, 2010
Subject: Free Listens review
Phillipa has a beautiful British accent. She reads with a steady pacing, slow enough to take in the words easily, though some people may wish for a faster read. Her dialect for the two con-artists' voices adds character to the recording, though at first I found it hard to understand. The recording is as crisp and clear as one could ask for. Full review at http://www.freelistens.blogspot.com.

Reviewer: ListeninginChicago - favoritefavoritefavoritefavoritefavorite - May 23, 2010
Subject: Great reading of classic short story
Kipling's story is deserves all the accolades it has received over the years. Philippa's reading is a classic gem that subtly supports without distraction, while leaving the story to shine. If you have never read the story (or at least, not read it recently), this is the way to be (re)introduced.

Reviewer: FNH - favoritefavoritefavoritefavoritefavorite - December 5, 2008
Subject: Free Audio Review
This short story tells of high adventure and excitement and is very well read. If you haven't seen the film (1975) then listen to this reading of the original before you do. It's an audio treasure, the reader puts such heart and soul into the reading it reduced me to tears at the end, and I'll be hard pushed to offer a better recommendation than that.

Strangely the story doesn't relate incident after incident of death defying adventure in the Indiana Jones style but rather in a more step by step advancement style. At each stage you know what the men are up to, and through use of the blind belief that an Englishman can do anything and a bit of stiff-upper-lip they climb to the dizzy heights.

It's simply a thrilling story well written and incredibly well read. Once again I feel myself having to rate this story as a MUST-LISTEN!

If you want to read more of my reviews of free audio visit http://freeaudioreview.blogspot.com/

Reviewer: Philippe Horak - favoritefavoritefavoritefavoritefavorite - December 1, 2008
Subject: A lovely recording
The narrator, a journalist, encounters two ruffianly-looking adventurers, Daniel Dravot and Peachey Carnehan, who announce that they are off to Kafiristan in the mountains of Afghanistan to make themselves Kings. Some two years later, on a hot summer's night, Carnehan creeps into his office, a broken man, crippled and in rags, and tells an amazing story. They had indeed made themselves Kings, persuading the local people that they were gods, mustering their army, asserting their power over the local villages, and planning to build a Nation. But Dravot had tried to take a wife; terrified, she had bitten him until he bled, and he was seen to be "Not a God nor a Devil, but only a man!" The people, led by the priests, had turned against them, dropped Dravot from a high bridge to his death, and crucified Carnehan with wood splinters. Carnehan is carrying Dravot's head, and his golden crown, in his bag. He hobbles away and dies soon after. No sign of head or crown remains.
A lovely recording by Mrs Philippa which will please all listeners looking for a short story set in a far distant country.

Uploaded by librivoxbooks on October 30, 2008